Scenic landscape,  great weather, a lot of to enjoy and discover, Albania offer so much for all of those who love cycling.

Tirana, the capital of Albania.

The meeting with our guides will be at the hotel in which we will be accommodated.  It is a comfortable hotel near the center of Tirana.

After the introduction with the group and a short description of the itinerary we will take a city tour starting with a walk on the broad boulevards to proceed with a visit at the monumental mosaic that decorate the National Museum walls, the glory of Albanian Independence. Our tour will be continued with a small deviation toward the Block zone, referred to the previous nomenclature of the communist regime in Albania and to be concluded with a visit in the house of the ex-dictator Enver Hoxha. This is the most vibrant area in the city, with many bars, clubs, restaurants, etc.

After a two – hour drive from Tirana we reach our destination in Qafe Thane where our cycling tour toward Pogradec city starts.

Pogradec is a city and municipality in central Albania, situated on the shores of one of Europe’s deepest and oldest lakes, the Ohrid lake. It preserves a unique aquatic ecosystem of worldwide importance, with more than 200 endemic species. The importance of the lake was further emphasized when it was declared a World Heritage Site by UNESCO in 1979.

Known for its famous writers and poets, whose works are a crucial part of Albanian literature, Pogradec possesses also a rich folklore. Many songs and dances, which have been created throughout the centuries, are based on the beauty of the lake and the love for nature.

Accomodation will be provided in a comfortable hotel that the warm welcoming city of Pogradec offers.

We leave Pogradec with the new day rising to proceed with our next destination the city of Korça otherwise known as the “Serenade City” which offer a magic atmosphere.

Korça, a place of great natural beauty, featuring the renowned Ohrid and Prespa Lakes, mountains and national parks. It is like a gold mine which offers diversity for every visitor.

Famous for its Carnivals, Masked Balls and cobbled paths, Korça offers as well a wide variety of delicious and traditional culinary.

In the afternoon we will enjoy a walk through Korca, Albanian Cradle of Culture. Here we are given the opportunity to visit the Orthodox Cathedral, which is considered the biggest and the most important in Albania because of its size. A visit to the first Albanian School will not be forgotten, already converted into the National Museum of Education.

Dinner will be served in a restaurant in which local specialities will be tasted.

Accommodation in a city hotel.

The next morning we leave Korça with an aim to reach Farma Sotira. On the way to Farma Sotira we will enjoy the cycle through immense valleys and ride up on winding paths through dense and wide forests.

Barmash is the village we will be cycling along to progress with the village of Germenj. A cycling which will take place on the side of the Gramoz mountainrange where we will behold the natural magnificence finish our daily tour in Farma Sotira.

Situated in the heart of the forest, 15 km away from Leskovik, Farma Sotira is a natural beauty which offers immense tranquility and inner peace. The landscape is magnificent, especially in spring when the dazzling view of blossoming diverse flowers is breathtaking.

Known as “The city of Roses”, located in the southeast Albania, Permet is an attractive city with alpine climate and affectionate residents.

It is the synonym of a city with a hospitality rare to be found, the flower city and traditional songs. It is distinguished for its vineyards, tree plantations and wine present in every Albanian home, it is also known for the Permeti raki – an alcoholic beverage.

Part of the city of Permet are also Benja’s thermal waters, situated 14 km away from the city, near Lengarica river. These are warm waters with sulfuric base and curative effects. A big rock about 30 m high is the city symbol.

Accommodation in a city hotel.

We start our cycling day toward the city of Gjirokastra. It is one of the most important touristic city of southern Albania.

The culture of Gjirokastra district is characterized by wealth of folk and regional costumes, musical traditions. It is famous for its wood and stone carving.

This city of “a thousand stairs”, with hundreds of ottoman-style houses with stone roof and of wooden balconies, can be called a magical city with a glorious past.

The city of Gjirokastra was included on the list of World Heritage UNESCO in 2005. Gjirokastra lies downhill from the 13th century castle.

In the afternoon we will enjoy a walk through typical cobbled streets to continue with our visit in Gjirokastra’s castle, undoubtedly on of the most magnificent structures.

We will be hosted in a locally arranged hotel.

After a 20-minute drive we arrive at Jorguzat village from where our cycling for the day starts along the twisting road to Qafe Muzine to proceed with our visit to the Blue Eye. This magical place is called as such due to the blue groundwater source. Found in the middle of the woods this stunning natural resource is a touristic attraction. It a picturesque spot whose profound source springs crystal water and is transformed in blue under the sunnrays.

We head to Saranda city, known as the south getaway. It is situated between high mountains and the blue Ionian sea. Facing the Greek island of Corfu, Saranda is one of the most appealing tourist destination in Albania. Apart from these reasons it is offers historic and archaeological values. The city has always served as a port for the Mediterranean countries.

This day will start with our next destination, the ancient city of Butrint, the most important archaeological site in Albania.

We leave Saranda with the new day rising. On the way to Butrint we will enjoy the marvelous scenery of the Ionian coastline where the profound blue waters are beyond imagination. Leaving behind the brilliant view of Ksamil’s three islands we carry on our tour to Butrint.

Butrint, undoubtedly one of the most attractive cities of antiquity. A narrow stretch of sea separates the city from the Greek island of Corfu. The city is an archaeological jewel, listed as a world heritage site by UNESCO in 1992. Its surroundings between the lake and the sea provide an exceptional view.

Once having enjoyed the tour in the ancient city of  Butrint, we will return to Saranda where we will be accommodated in comfortable hotel.

There is more to this tour. Dinner will be enjoyed at a restaurant by the sea in which we will witness the magic of this seaside city. 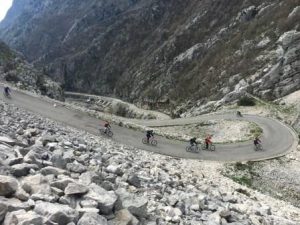 This is going to be relatively a long cycling day. This day’s itinerary is one the most beautiful of this tour. The day’s course is definitely going to be memorable as we will cycle along a road from which we will enjoy the stunning relief, with mountains and ridges on the right and the boundless sea on the left. We will be cycling near numerous coastal villages to arrive at our next stop, Porto Palermo, a peninsula in which the castle of Ali Pasha is located. This castle was built to honour his wife, Vasiliqia, whose he gifted it.

This tectonic peninsula, situated not far from the village of Qeparo, has a triangular form. During the communist regime Porto Palermo was a highly restricted military zone with a naval base. Today it is surrounded by gravel trail which lead back to the asphalt road.

We will be accommodated in the coastal village of Jale, our final destination of this cycling day.

We start the day by leaving behind the coastal village of Jala to cycle towards the village of Vuno and that of Dhermi, two of the northernmost sea – facing villages in the Himare province. They are roughly on the hillside, cut through by the national road. The two villages are built agains steep hills, and are broad, with roads that cut back the weave in between the most vertical stacks of houses.

We have come to the most challenging part of our cycling tour to reach the National Park of Llogara, the highest point 1135m above the sea level. It was declared as such in 1966 by the Albanian government.

Situated 40 km south of the city of Vlora at the dividing point between the Adriatic and Ionian seas. The park is distinguished for its expansive pine forests.

Under the healthy tree breeze we will enjoy our rest in this park to regain the needed stamina to continue our cycling tour toward the coastal city of Vlora. We will be accommodated in a city hotel and enjoy dinner in a restaurant by the sea.

This is going to be the final day of our tour. During our drive to Tirana airport, if time allows, we will be visiting the ancient city of Apollonia. It is the largest in the Adriatic basin and the most mentioned among 30 other cities with the same name, from the ancient times. It was established around the beginning of the IV century BC. Apollonia’s ruins were discovered in the early nineteenth century.

After the visit, transport to  “Mother Theresa” airport.

“Albania has everything , from intimidating mountains in the North  such as Valbona Valley, Theth and Vermosh too stunning beaches in the South, around, Vlore, Dhermi, Himare and Sarande,  unintentional hipster vibes and fascinating history, delicious bio food and great coffee bars, at last but not least Albanians are known for their hospitality” Albania has natural Read more

We are sorry, there are no reviews yet for this tour.